Difference between revisions of "H-bridge Driver" 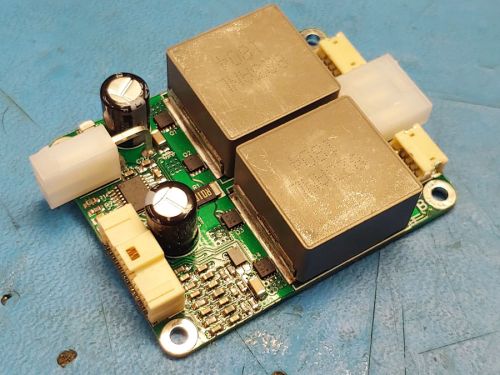 Initially this H-Bridge was designed specifically to drive TEC loads. The only TEC drivers I could find for sale were expensive scientific devices where a ultra precisely temperature controlled surface was needed, or could not deliver the current required for a refrigerator application.

Thermal Electric Coolers, other wise known as Peltier units, require proper driving to get the most cooling potential out of them. Although resistance is fairly flat throughout the temperature swing, Constant current driving is perferd for more predictable results. removes supply with low ripple.

So a Large LC Filter is placed at the output. Due to the Rining a LC tak circute creates, a large voltage over shoot can occur if the output is switched on to quickly/ It was difficult to meet the spec of 10% worst case ripple, and prevent to uch overshoot. Ulitmutly a software solution was used to limit the slew rate inorder to prevent the large voltage overshoot problem. Firmware modification should not never the PWM slew rate limit unless the load can handle large overshoots.

How to get TEC's as cold as possible

The goal is to pump the most energy (in watts) from one side to the other, without generating to much heat from "IR losses".

First, a TEC pumps heat the fastest when the difference between the two sides is Zero.

Since TEC's are only rated for a maximum amount of current, There is a maximum temperature difference before the heat pumped is zero. So Cooling the "Hot" side with large heatsinks or even another TEC unit is needed. However adding more TEC's only works to an extent.

Reaching very cold temperatures is impeded by another factor. These coolers generate a lot heat (from resistance inside the cooler) as well and moving heat from one side to the other. It may appear from the performance graph of the CPM-2F that 6Amps will achieve the biggest temperature difference and therefore the coldest temperature. It turns out that although though the temperature difference is large, both sides are heated by the IR losses. For example: 6 Amps gets 10C Coldside and 85C Hotside, while 4 Amps gets -10C Coldside and 55C Hotside. There is a sweet spot between generating to much heat, and pumping the most thermal energy during.

Because of IR losses, using PWM is not as good as a constant voltage, since the on time is generating a lot of heat even if the average is the correct sweet spot voltage.

Making a refrigerator with TEC's is not a good idea. Commercial TEC refrigerators are usually gimmicky devices that cool one bottle of beer. In real refrigerator applications, refrigerators with mechanical pumps are much more cost effective for equal performance. It was a design requirement to use TEC's, and because of this, the refrigerator project failed. Even with high performance insulation using Vacuum Insulated Panels, The two TEC's could not pump the energy out of the container fast enough to keep it cool.