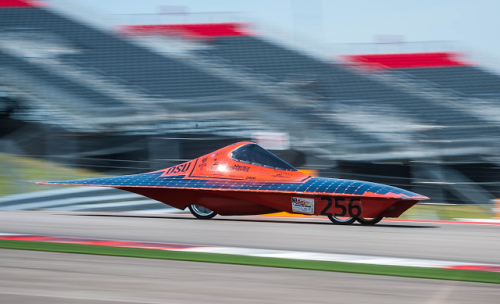 This post is just a few words about my current job and life. Without this post, the future projects I post won’t make much sense. :) My first semester At Oregon State University, I joined to the OSU Solar Vehicle Team. The team's solar car was “out of town” at the Abu Dhabi Solar Challenge.

The next semester I tried to become more involved. When the car returned, I came to realize what a monumentally challenging and exciting team project solar car racing was! I took on any responsibility they would give me and began learning everything I could about solar racing.

I built a little Solar Sensor box I call the "Sun Computer" for the team. It is a device for detecting solar power(W/m2)and XY sun angle ahead of the solar car while it was on the road, and map the data to a GPS location.

Midway through the Sun Computer project, the Electrical Lead I was making it for, Wilkins White, stepped down. I offered to lead the electrical team and I was elected!

At the time, the returning car, “The Phoenix” was going to be put on a shelf, and an all new Vehicle built. Designs for the body of the new vehicle were finished and tested, but ultimately the ending school year and lack of engineers on the team led the New Vehicle project to fall too far behind schedule.

Our deadline was the American Solar Challenge 2016 in July of that year and instead we decided to refurbish the ageing “Phoenix” vehicle.

I am designing an all new electrical system for this Phoenix 2.0. It is my hope that this electrical system will also be apart of any future vehicle the team makes. I am making sure there is plenty of documentation, flexibility and foresight to do so.

Some things Solar Racing dwells in

I’ll make a post about our Phoenix 2.0 “Spec Sheet”

Electrical Lead is full time job, but I get payed in the chance to do incredible hax with a team of incredible people!

Our team is now called “Phoenix Solar Racing”. We lost our workshop space, ~10 grand annual sponsorship, legal support, car insurance support, and the nonprofit status that allows sponsors of our team to receive tax deductibility on donations to our team.

The new workshop is now in the two-car garage at the house I am living at. :)